Oh, to be this cool! So cool that your skin turns blue. An old one, but definitely worth posting.

Some of you may have noticed my Portfolio page remains under construction– due, it so happens, to a mix of blurry photos and several unsatisfactory projects still in need of replacement! While I work towards creating the Perfect Portfolio that Is Everything I Could Ever Want, here are a few snapshots of one my better projects, Blue DevilJeans.

Before I reshoot this I plan on branding a pair of socks to go with them, so that our Blue Devil’s hooves won’t get chilly . . .

I admit, I drew this mostly as an excuse to create flowing trouser lines . . . . 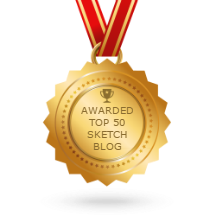